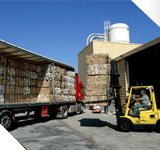 Avance Cartón Ondulado, SL has been active in the cardboard box industry for more than 70 years. In 1939, the company was founded in a workshop in the city centre of Madrid with the name Cartonajes Avance, dedicated to manufacturing paperboard boxes. With the appearance of corrugated cardboard in Spain, a new company called Cartonera Central was founded in the early 1950s in Alcobendas, which became the leader in corrugated cardboard in Central Spain. In fact, it is one of the first corrugators established in the entire country.

In 1999, the new company Avance Cartón Ondulado, which manufactures corrugated cardboard sheets, containers and packaging, was established at its current factory in Cobeña, which offers sufficient space for the most modern means of production.